The Rise of BDD: Architecturally Changing The Face Of The Past 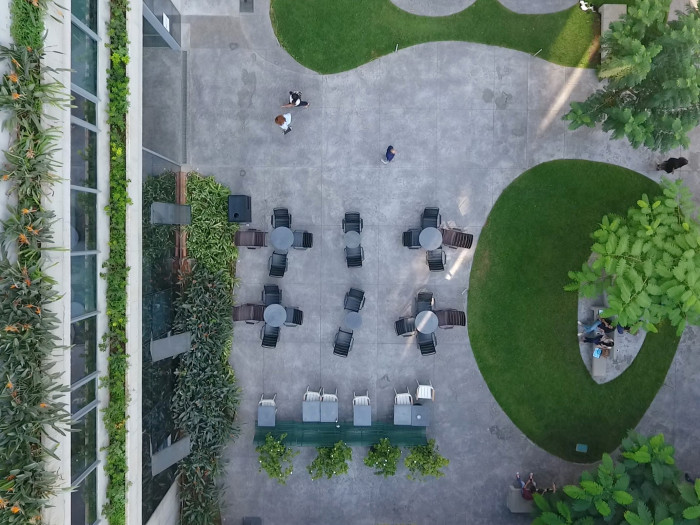 When roaming around the Beirut Digital District (BDD), and exploring its thriving entrepreneurial community, the rich history which the site holds, can often be overlooked. However, alongside the modern facades of glass buildings, housing some of Lebanon’s leading companies, one can catch a glimpse of the past, carefully integrated into the urban plan of the development.

The district which BDD is nestled in, is located on the ‘green line’ that once separated Beirut into East and West. However, the architects and urban planners, sought to change that viewpoint, one building and one landscaped area at a time.

The Bachoura district, in ruins... today, BDD rises from the area

“BDD was conceived as an ‘open’ masterplan that stitches the two parts of the city together, connecting them through a series of piazzas and open landscaped areas,” shares Karim Moussawer, Principal at Paralx, one of the architectural firms behind BDD. “Its main vision is to create a space of convergence rather than of segregation,” he adds.

In order to maximize space in an already congested area, and make room for the planned capacity of 10,000 creative and digital minds, going vertical was the most viable option. Using verticality as an urban form, was devised to maximize the open areas in a city that lacks them. The architects and visionaries behind BDD’s design, sought to set an example for future developments, and contribute to creating a sustainable and a pedestrian-friendly neighborhood within the city.

From an artistic perspective, the verticality of BDD is also symbolic of “rising from the war and reaching out to the sky, reflecting BDD ambitions,” Moussawer shares.

As with every development in Lebanon, the scarcity of space and the non-existence of synergies between the old and new, creates a challenge for the architects to design around. When conceiving the masterplan for BDD, the various teams involved were committed to aesthetically integrate into the urban fabric of the bustling district of Bashoura. Many historical monuments and buildings exist in the area that were preserved. Take the St. George Church for example, part of phase B of BDD, which is currently under construction. The renovation of such a monument acts as an iconographic center of an increasingly growing urban quarter and fulfill a hope of creating a bridge between communities

As Moussawer explains, “With its contemporary design and the mix of the old and the new, the Church will be renovated to welcome the youth, mainly comprised of the ‘postwar generation’ – who constitute the majority of BDD’s tenants.” The overarching message to be conveyed through the integration of the Church into the masterplan of BDD, is that religion is an act of convergence rather than a reason for division.

The design for the St. George Church was recognized and received the American Institute of Architects- AIA Design Award in Los Angeles.